Your page? Unpause your account to remove this banner.

Nathan Tabor Real Estate Academy
How Nathan Tabor Can Help You!
No matter your real estate goals—buying, selling, renovating, securing funds or flipping—as an experienced and knowledgeable consultant, I will help bring opportunities into focus and develop a plan of action. You’ll gain the experience, know-how, and strategic planning to help you avoid the many pitfalls of the real estate business. And you’ll take away actionable items that you can implement in your business today!
✔️  Brainstorming session:  This is a one-hour session with Nathan designed to answer and/or discuss any topics.  Ranging from where you should start or how to deal with a specific issue.  The cost is $500 for one hour.  Contact Nathan to book your time!
✔️  Worksheets and Lists:  Cap Rate worksheet, Income and Expense worksheet, Due Diligence request list, draft lease, draft promissory note, personal financial statement, buying/selling checklist, renovation checklist and draft letter of intent.  Learn more here or purchase here for $299.
Services offered:
✔️  Coaching: Nathan will walk you through a series of exercises from setting your goals, developing your business plan to expanding your business. Contact today!
✔️  Consulting: From finding a deal, engaging a real estate broker, structuring a deal, approaching an investor, submitting a loan request to any part of a real estate deal Nathan can assist you. Contact today!
✔️  Analyzing Deals: This involves all aspects of the deal ranging from reviewing the purchase contract, rent rolls, comps, expenses and leases to analyzing the P&L’s, comps and cap rate. Nathan will then provide you with a report identifying any areas of concern. Finding an error or correcting an error can swing your deal by tens of thousands if not hundreds of thousands of dollars.  Contact today!
✔️  Flipping Deals: Nathan will help you package your deal to take to market. First impressions matter the most. The strength of your packet sets the tone for negotiating the sale. Contact today!
✔️  Finance/Refinance: There are numerous options available: Construction Loans, Acquisition Loans, Cash Out Refinance, Renovation Loans and many other options. Contact today!
✔️  Due Diligence: Don’t have the time to walk every unit or worried you might miss something? Nathan can help you will a particular part of due diligence or he can do all of the due diligence for you.   Contact today!
Buy Course - Founders Club Special Find, Finance, Fix & Flip Apartments for Profit™
Contact Nathan to Discuss Services
How to Find, Finance, Fix & Flip Apartments 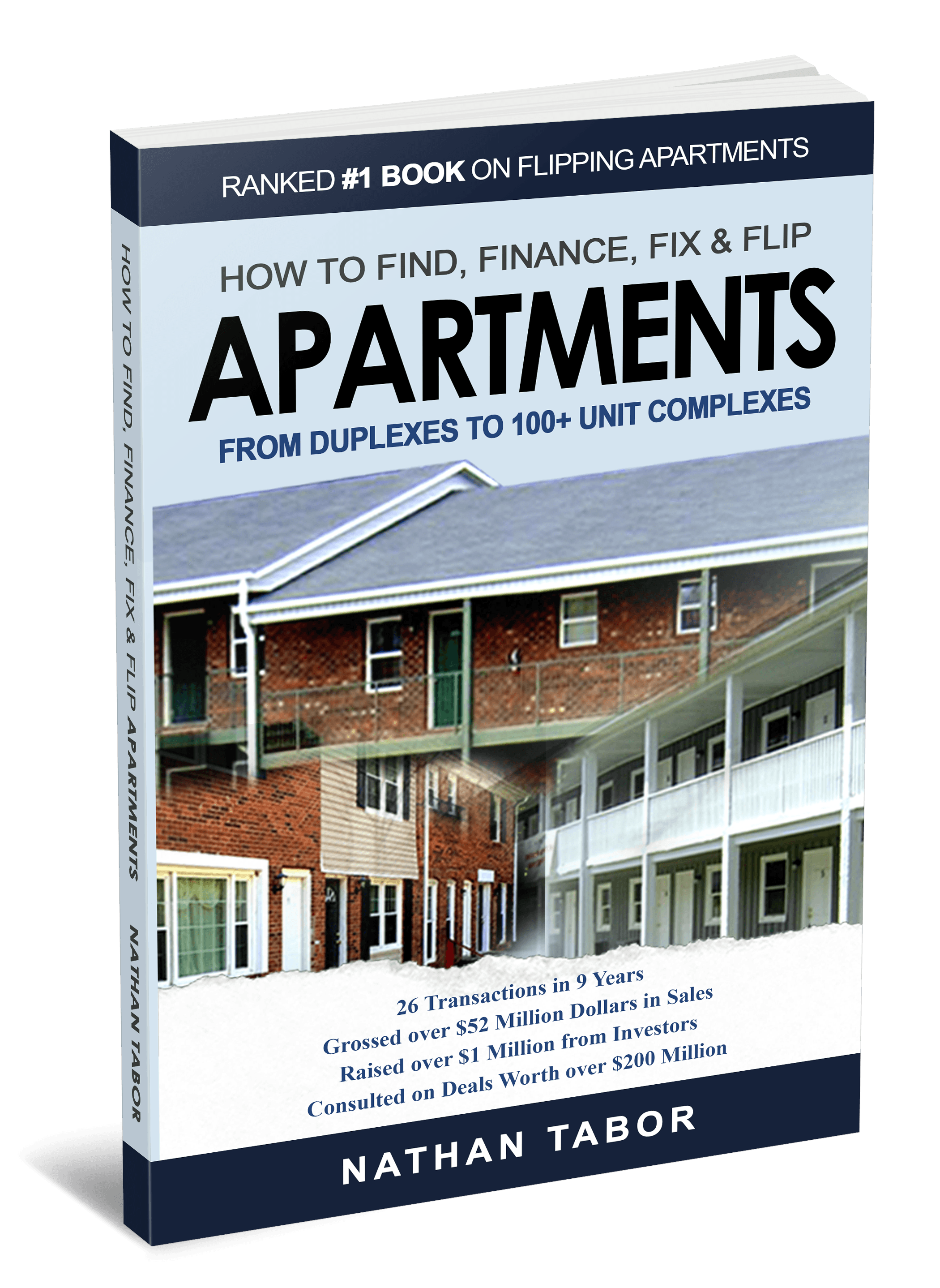 Get my FREE BOOK
In 2006, a gentleman walked into my buy-here-pay-here car lot and asked me if I wanted to buy an 18-unit apartment complex.
It piqued my interest, but I had NO background to speak of in real estate. I had never flipped a house, and I certainly hadn’t renovated a multi-family apartment complex.
The numbers looked good, and I thought, How could I go wrong. So I called my banker and pitched the idea, which she flat-out refused. Over the next three days, I asked four other banks and they all said no. At that moment, my property-flipping career was over before it had ever started.
But I didn’t give up. I kept looking and finally found a local community bank that agreed to a meeting! This was further than I had gotten with the first five banks. The local banker asked me to bring my current and previous tax returns—and my wife—to the meeting. I wasn’t sure why my wife needed to come as well, but at this point I wanted to get a deal done so I was ready to oblige.
On the day of the meeting, my wife and I drove to the community bank and arrived 15 minutes early; we didn’t want to be late. The meeting started, pleasantries exchanged, and a few questions were asked about our personal lives.
We then discussed the project at hand and the financial need to make it happen. Within a few minutes, the banker quickly spun around in his chair, turned his back to us, and started typing on his computer. He made no comment to indicate what he was working on. Five minutes later, he turned around and said, “Here is your commitment letter: 100% financing and 100% renovation. We can close in 30 days or less.”
“Huh?” I murmured. He said again, “Here is your commitment letter: 100% financing and 100% renovation. We can close in 30 days or less.”
Moments later, I picked myself up off the floor! WOW! All those no’s suddenly didn’t matter. Through perseverance, I had achieved what I needed to get the job done.
A few months later, the owner of a 12-unit apartment complex behind my 18-unit complex approached me about buying his units. Again, the banker gave me 100% financing with 100% renovations. It took only three months to complete all of the renovations and lease up the units. In less than 8.5 months, I bought, renovated, and sold the 30-unit complex for a $223,000 profit!
Had I quit after the first “no,” I wouldn’t have had this opportunity—or earned the profit. This single opportunity led to the next opportunity, which led to the next, and so forth. In searching for your own financing, you will be told no. But don’t take no for an answer. Dig in, ask questions, do research and, if necessary, adjust your pitch, your model or your plan. But don’t give up on your passion.
What’s more… you will be told no, you will fail, you will make mistakes. You will have all kinds of things happen to you. But each time, just dust it off and continue to pursue your goals.
How do I know? I was told no. I failed. I made mistakes.
Between 2006 and 2016, I’ve bought, renovated, and sold over $52 million dollars of real estate. I’ve also consulted on real estate deals worth over $200 million dollars. In 2014, 2015, and 2016, I was ranked as one of the largest management companies in the Piedmont Triad, owning and managing 399 units in 7 complexes.
Testimonials
"Nathan absolutely killed it!"
- Brian Meara, PA
“I was immediately impressed with his teachings and hired him as a coach and consultant. He was worth so much more than what I paid and I am grateful to him. In a short amount of time I utilized the principles and foundation laid out by hand. I went from not actively doing real estate to closing on my first deal. Thank You Nathan!”
-  Uilani Smith, WA
“I had the pleasure of attending a Real Estate Investing workshop that Nathan was the key speaker. It was truly one of the most informative and fun workshops I have been to. Nathan has a way of breaking down the material so that everyone can understand and follow, I also like that he genuinely shares his information to help others be successful in their investing journey. I highly recommend Nathan.”
- Jeff Grenier, IL
“Nathan Tabor's presentation on multi-family fix and flip was outstanding. It takes the everyday fix and flip (if there is one) to the grander scale. How he can take a vacant property to a performing cash flowing asset, and then sell it is just amazing. I am looking forward to learning more from this man of God who is truly a Go-Giver.”
- Brian Tracy, IL
“Nathan Tabor is an unbelievable wealth of knowledge!”
- Josephine Sidhu, PA
“Very informative & organized presentation. I've been to seminars that drag on & get repetitive but Nathan's presentation is concise & on point. He has a fun delivery that never leaves you bored or looking at the time. His information is specific & applicable, not useless generalities. Well worth the time and money.”
- Jaye Martin, NC
“I had the opportunity to listen to Nathan lecture on Multi-Family Fix & Flipping strategies at a workshop in Chicago. He opened the door to many more possibilities than I knew existed in the world of real estate investing. Until then, I never knew what Cap Rate meant and how useful it was to determine a potential deal. He is certainly a great mentor and a role model for other budding investors like myself.”
- Joe Attanaseo, IL
“I had the up-most pleasure of hearing Nathan speak on Real Estate Investment and success. His presentation, information and inspiration was game- changing. What I respect and admire about him most is the combination of his knowledge and passion for helping and serving others.”
- Daniel Kwak, IL
Nathan Tabor
All Rights Reserved - Copyright @ 2019